There’s more than a hint of randomness to this Showcase. It’s a peculiar time of year in Scotland. There are spring flowers, some blooming later in one garden than they are in the next, but the weather is still cool, so my shoulders do not un-hunch when I go outside – I still snuggle down into my upturned coat-collar. The lighter days are with us, but no sooner does that happen than they put the clocks forward, and I have to get out of bed in darkness, feeling as though I had been plunged back into winter, shivering as my feet feel for my baffies.

So I thought I would start spring-cleaning the zen space, see what I had laid in the corner, blow the dust off it, and post it here. By that I do not mean that I’m dishing out poems and haiku that are in any way remaindered or second-class, they’re more like rediscoveries. There’s some new material in here too, maybe one or two items we’ve seen before, and some neglected crow stuff with more left over for a second helping next year. I tend to lose track, one of the blessings of being a haijin.

Alongside them, to increase the randomness, I shall post details from paintings by Vincent van Gogh. They’ll have nothing to do with the words, in fact they’re irrelevant at best and often downright contradictory, and that’s probably the point…

For the future, I’m looking for another ‘guest editor’. I’m hoping to recruit Ray Sharp, but he hasn’t said yes. Yet. 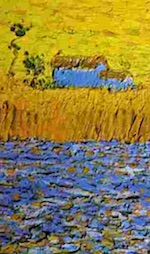 quiet evening –
the relics
of a saint

Roman road
straight
to each other

The barking dog
Barking in silence
As the door shuts

horsefly biting
until the very end

into the chestnut grove
to enjoy wild asparagus
and yellow jackets

Emily, your brush
dips with the grace of this bee
on each pendant bloom

longest trip by bike –
Japan to B.C. amid
tsunami debris

anticipating the return
of cherry blossoms
sparrows in burnt grass

evening lingers
in pink profusion
all the lovely faces 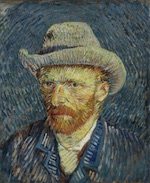 paper crane
between its folds
a cherry blossom

the rainy season
a cardboard town
begins to pack up

secret garden
the sound of crows
in their leaves

train station
the heat of the platform
in my blood

the colour rain
through my blood
of wood an iron

attic moon
probing the splinter
in a finger

skipping rope turns, beats
tarmac as it falls; children’s
laughter in the air

Green stems towering –
a thin city in the grass.
No smog to speak of.

I drive the city
in the deep magnificent
of a moonless night.

Crow, he tells me things
Him being so commonplace
no one else listens

stripping wallpaper
I peel away
the years

Under Shiva’s swirling arms of white and grey bark I stand. In the breeze shimmering sunlight cascades through the leafy canopy to form flickering shadows which, moment by moment, lengthen with the setting sun. Slowly I turn, mindful of each step, mindful of each breath.  I place one bare foot in front of the other feeling the soles of my feet connect with blades of rough green grass and brown earth. As I walk in silent contemplation I wonder where my feet end and where the earth begins.

merging slowly
with the flickering light
earth, flesh and bone

The pirate ship in the park is like the Mary Celeste, abandoned and silent.  Children’s voices no longer fill the space.  In their place the rush of autumn breath through deep green leaves mingles with the slap of halyards.  A boat lies skewed on soft, grey, shimmering mud and, above, there is the faint, haunting cry of gulls riding the air.  A  brown sailed barge tacks up the estuary, waves cutting through its bows as it heads for home.

Muse-Pie Press announces the latest edition of The Fib Review, the online repository of the Fibonacci poem. What’s that? Go here and find out!

And of course A Hundred Gourds 5.2 is now also released – go here. However, along with that comes some bad news. A Hundred Gourds 5.3 will be the last edition, after which publication will cease. It will be out in June. I’m sure all readers of the zen space will share my sorrow at this news. Thank you, AHG, for what you have given us and shared with us.

When visiting these publications, please let them know you heard of them from us. Thank you.

Do you know of anyone who writes short, in-the-moment poetry? If so, please alert them to the presence of the zen space.

The next showcase at the zen space will be Summer 2016, which will be released, subject to karma, on 1st July 2016.