My editorial policy includes accepting haiku in a language in which the writer isn’t fluent (their fluency isn’t the point), and haiku that include the words “honey tornado bloom.” Just in case you were wondering. I’m a kind of anti-Yoda, I don’t dig his kind of zen y’know. I’m more of the “There is no do or not do, only try… just not too hard” school. I’ll accept poems from somewhere that has a Saxon church, I’ll accept poems about 1. the wind, 2. numbers, and 3. a young woman in a dress the colour of sunrise – but apparently not when I specifically suggest that I want them. And I had a whole lot of Ukiyo e prints showing the wind ready for you. Tell you what, I’ll run with them anyway, and maybe that’ll inspire you to think of something totally unconnected.

a burden
on the rack —
frozen corpse

bleary-eyed
with frosty nights
the moon

frozen stiff
by a snowstorm
and dementia

dawn fishing
the ebb of starlight
in a bucket

sitting on the beach
just look, don’t do anything
eternal branding 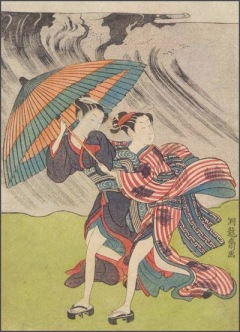 Here on the island,
time is faster, more cruel.
Ceilings rot. Knives rust.
My belt hangs green, sheathed with mold.
Sure, I’m next. Then this tanka.

Upon my 52nd Birthday

Old poetry book
for kindling, the campfire approves.
We plan our next chapter,
our next whirl around the sun.
Me: new tea in an old cup.

A Month Before Leaving Majuro

Our days here dwindling,
we speed into the lagoon.
Our boat’s shadow skims
the sea floor with eagle rays.
So have I moved through these days.

I tossed my last key,
free to enter anywhere—
no house, car, office.
Home is where loved ones lie dead.
Home is the world before us. 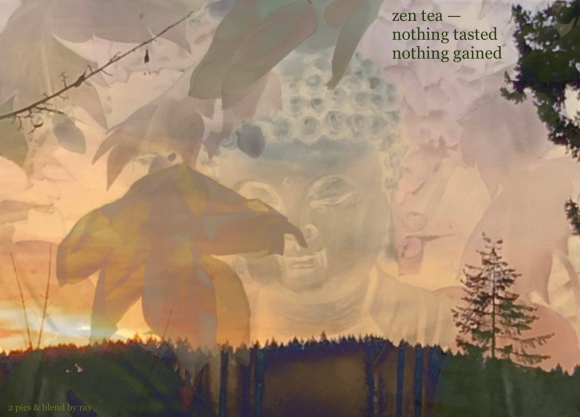 Went to the movies
Brought ackee, fugu and bags
Someone in the dark 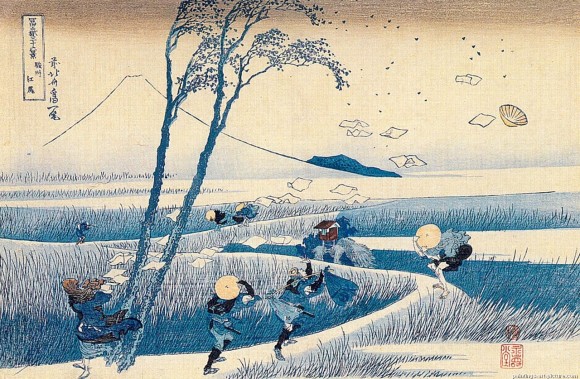 whaddya mean?
did it happen or not?
frogsfallingoutofthesky

if my tongue …
I hesitate to kiss her
not knowing

old barrel
(no man, too lame!)
I drop a dead crow into
my rotting reflection

When contacting any of the publishers/journals/writers mentioned below, please mention that your attention was drawn to them by the zen space. Thank you.

Writer Gary Shteyngart says “Doshi brings all her skills as one of the world’s best poets to this lovely, beguiling, brilliant novel.” Small Days and Nights by award-winning poet Tishani Doshi, named an Irish Times Book of the Year 2019, is a captivating and original story of two sisters caught in a moment of transformation, set against the vivid backdrop of modern India. It’s a story of the ties that bind, the secrets we bury, and the sacrifices we make to forge lives that have meaning.

Escaping her failing marriage, Grace Marisola has returned to Pondicherry from the United States to cremate her mother. Once there, she receives an inheritance she could not have expected—a property on the beaches of Madras—and discovers a sister she never knew she had: Lucia, who was born with Down Syndrome and has spent her life in a residential facility.

Grace sets up a new and precarious life with Lucia; the housekeeper, Mallika; drily witty Auntie Kavitha; and an ever-multiplying litter of puppies. But Grace’s attempts to leave her old self behind and create a new family prove first a struggle, then a strain, as she discovers the chaos, tenderness, furry and bewilderment of life with Lucia.

The editorial team of Bob Lucky and Ray Rasmussen is about to change. Rich Youmans is their new Editor-in-Chief. Co-editing the haibun section with Rich will be Terri French. Tish Davis will edit a separate Tanka Prose section. And Patricia Prime will be handling their articles section.

a home for the wind – edition 3:8 of the cherita

This edition of a home for the wind showcases 90 fine cherita and cherita terbalik from writers and poets who hail from UK, USA, Singapore, New Zealand, Lithuania, Canada, India, Australia, Pakistan and Germany. You can find it here.

The next Showcase at the zen space will be Spring 2020 which will be released, subject to karma, on 1st April 2020.

[Any advertisements etc. below this line, or inserted elsewhere in the zen space, are an unfortunate feature of the hosting platform, and are not the responsibility of the editor of the zen space. They should not be considered to have been endorsed by the zen space or by the editor personally.]